Investing is a zero-sum game, meaning your win is my loss and vice versa.

Let’s say you wanted to buy one share of a $100 stock. This means someone out there, on the interweb, needs to sell the stock. But the price is determined by supply and demand. If there are more buyers than sellers, people will bid up the price. Therefore, if you buy a share from someone and the price goes up, that implies the person that sold it to you is losing out on extra profit.

Since, investing is this zero-sum game, this means having an edge, or an advantage is important. With that said, we’ll talk about three edges where you can differentiate your skills and win at the game.

An informational edge is the most rare these days. With the advent of the internet, information is so widely available it’s rare you can get an edge this way. A lot of investors in the micro-cap space ($300 million market or smaller) try to get an edge here because information can be harder to attain with smaller companies.

Warren Buffett tells a story, back 70 years ago when he started investing, he would go to New York City every winter to visit family. While there, he would go to the library to check out the Moody’s manual on all the publicly traded stocks. Year after year he would go back to this library and check out the same book and one time, he realized he was the only one who was checking it out. This was a true informational edge because this book contained all of the publicly available information but no one else was using it.

The second type of edge is an analytical one. This is not as rare but it is very difficult. If we think about investing as a zero sum game, that theoretically means that we’re competing against everybody in the world. So the hedge fund traders and the people who get paid millions of dollars to play this game, we’re essentially competing against them.

I’ve heard anecdotes about hedge funds buying satellite data to count the cars at Walmart to see if they would beat quarterly earnings. That’s dedication. So you might ask, “how on earth can we compete against them?”

I never said it was easy but I do think it is possible if we do a couple of things. For one, I think a community aspect is important, to crowd source stock ideas and test the validity of them (try our forums, they’re slow now, but just wait!) Second, I think there are structural advantages retail investors like you and me have. For instance, big hedge funds and investment firms usually can’t invest in smaller companies because of liquidity issues.

If you think about Warren Buffett having $100 billion in cash, a 1% position for him is $1 billion. A lot of the companies I am invested in are worth $5 billion or less, which means that his 1% position is 20% of that entire company’s outstanding shares. When you buy 20% or more of a company, you have to go through a lot of legal headaches because you’re a huge shareholder. Plus, in terms of liquidity there’s no way 20% of shares would be available for trading.

This means that Buffett would have to buy in very slowly over time. And this is only a 1% position, unlikely to make a big difference in the grand scheme. Therefore, that means that we’re not usually competing against the very best of the best because of certain structural advantages.

However, I do think investors like us can beat the market if we just put in some effort, by reading SEC filings, looking at financials, and using good business judgement (or by checking out a subscription; wow, I’m really plugging IC today, seems like product placement if you ask me!) And while I’m at it, check out the Competence Circle. The idea behind it is to invest in what you know. Let’s say you’re a doctor and you know how to read medical studies; you’ll probably have an analytical edge while investing in medical companies.

So there are a couple ways we can stack the analytical deck in our favor. One, we can invest in smaller companies. And two, we can stay within our circle of competence.

The last edge is a behavioral edge and this is the most common. But I actually wouldn’t say it’s the easiest. Theoretically it’s the easiest, but it’s very hard in practice. Up until now, a lot of these posts have been about behavioral and psychological factors that we need to take into account when investing. This is because I believe they are extremely important as an investor.

Essentially a behavioral edge is focusing on the long-term rather than the short term. A lot of banks and analysts that cover stocks are forced into three-month by three-month time-frames called quarterly earnings. But in a three-month period, it’s pretty difficult for a company to achieve all of their targets, especially if they are focusing on the long-term. So the behavioral edge as an investor is being able to identify great businesses while looking at them through a long term lens.

A great investor named John Huber made the chart below, showing that even big companies are wildly volatile. This speaks to how behavioral edges are still relevant because, even though there is all this analytical fire-power from the “big guys,” us little guys, can take advantage of their short-term-ism. If this chart was updated, the swings would likely be even bigger. 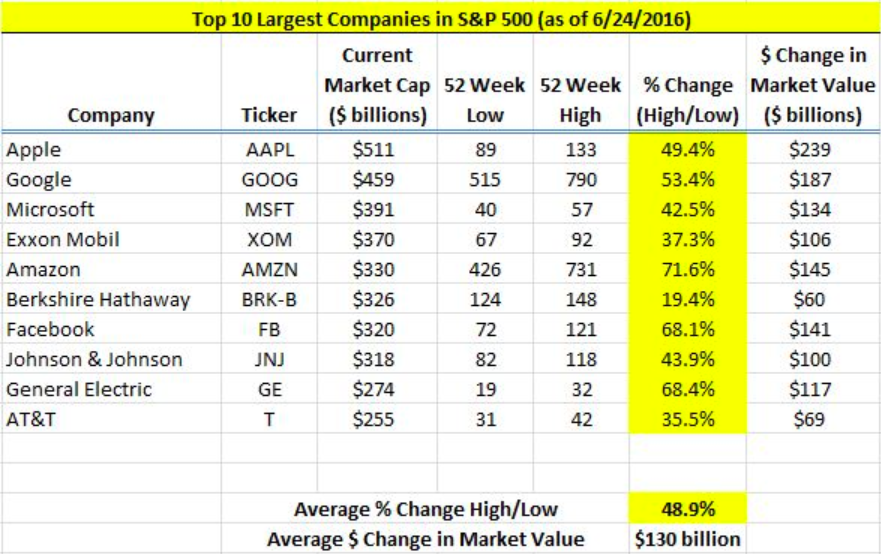 The three edges to win the zero-sum game of investing are informational, analytical, and behavioral. It might be a good idea to think about your personality and priorities when deciding which edge to capitalize on as well. If you love problem solving and business, the analytical route could be right for you. But if you’re pretty laid back and maybe don’t care too much about individual stocks, the behavioral edge could be right up your alley. And if you’re a private investigator, try to take a stab at the informational edge :).

In summary, the informational edge is rare, the analytical edge is difficult but possible, and the behavioral edge requires patience and a long-term focus.

I hope you can use this framework when you are thinking about what edge you have while investing.

If you enjoyed this, get our posts regularly here.